A Positive Creative Force for Good

Archdiocese of Perth » A Positive Creative Force for Good

From pages 6 to 7 of Issue 27: Community of The Record Magazine 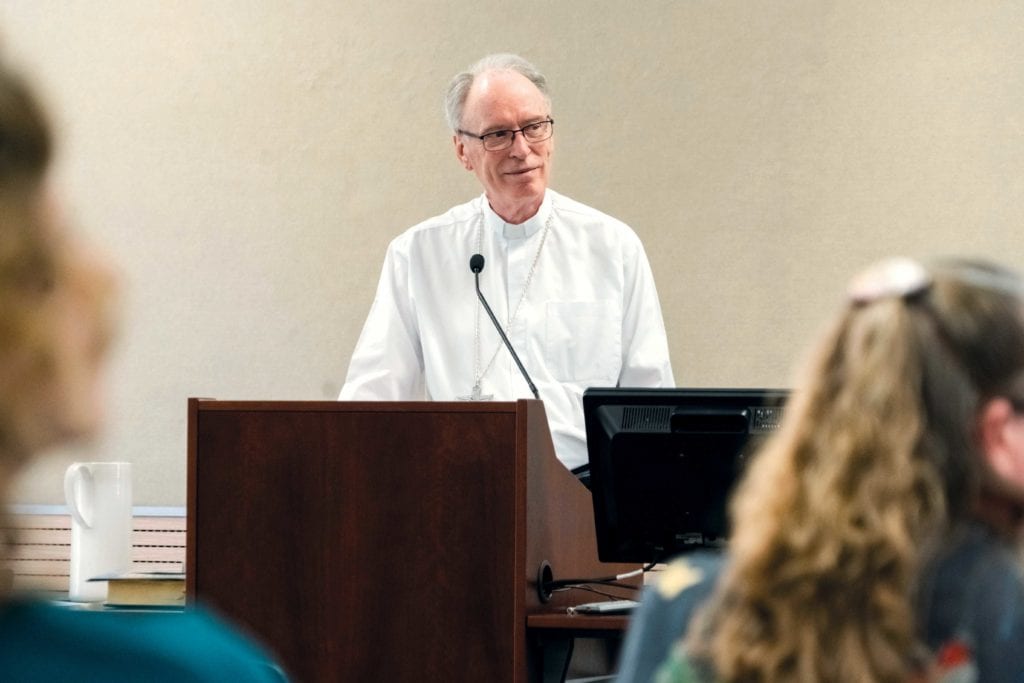 The Most Rev Donald Sproxton DD, Auxiliary Bishop of Perth, speaks to a Perth audience on the topic of Mental Health in Australia on 15 October 2020. Photo: Matthew Lau.

Community has become something of a buzzword

It is a word used to describe many forms of associations and groupings in our society today. Is it possible that the concept of community will be altered as a result and its rich meaning diluted?

When people band together to achieve a goal, there is great potential and creativity, and often a far better outcome eventuates than if one person alone were to drive the action.

The experience of collaborating can be enriching personally, as well as being a positive, creative force for good.

That band of people are already part of a wider community that values respect for the individual and the widening of opportunities for everyone in society.

I became aware of this when still a child and my family were living in Bayswater.

My father was a member of a friendly society that was known as the Ancient Order of Foresters.

Friendly societies were formed by members of the community who sought to offer support to families who were affected by unemployment and ill health. They were among the pioneers of health insurance companies.

It was truly amazing to hear of the way people were helped through very difficult times, and of the gratitude that was expressed by those families, as there was little else available that could satisfy their needs from government and other institutions in those days. Local communities helped their fellow citizens.

The Catholic community was one of the many communities that made up the Bayswater district.

Our parish was always small by comparison with others. The Catholics in Bayswater were less in number than they are today. But regardless it was a strong and cohesive community. The people had a strong sense of identity and pride. They knew each other, and many a time, when they became aware that someone was in need, they did what they could by contacting and supporting the person and their family.

Fr Jack Russell had been Parish Priest for nearly 20 years when I was born. He was very committed to the community he led. He would have baptised the parents of many of my friends, and went on to baptise their children and their grandchildren. His offer to Archbishop Prendiville to go to Bayswater had been accepted, when he told the Archbishop that his family in Kalgoorlie had decided to supplement his income, if he was to be appointed parish priest. The parish was unable to provide an adequate income for a priest at that time. Fr Russell proved to be a faithful pastor to the people for the 40 years that he remained there. The parish grew, and was able to support him and finance a new church.

The parish has been the natural development of those first small communities that St Paul reveals in his writings. These small communities were domestic churches and were referred to as “houses”. The Christian community of a parish has always been “the place of worship and the sign of the permanent presence of the Risen Christ in the midst of the people” (The pastoral conversion of the Parish community in the service of the evangelising mission of the Church, Congregation for the Clergy, 20 July 2020).

The parish has served the Church for so long and now is challenged to look afresh at its purpose. Pope Francis has asked us to “seek new ways” to proclaim the Gospel. Our communities are called to engage in “pastoral conversion that is essentially missionary”. The Instruction issued by the Congregation for the Clergy in July shows that this sort of pastoral conversion will lead to our parishes looking outward, going out of themselves, and being open to reform and structural change, “in the spirit of communion and collaboration, of encounter and closeness, of mercy and solicitude for the proclamation of the Gospel.”

The Archdiocese is working on assisting the parishes with their renewal. The Archdiocesan Plan makes this area a priority and our Implementation Group has been successful in reviewing the Parish Pastoral Council Constitution. The creation of parish hubs has opened us to finding new and creative ways of collaborating together to enable us to be more effective in our mission.

Our parish communities are called to renewal, where people, together with their clergy, journey with their gaze fixed on Jesus Christ, and are “places of creativity, relationship and motherhood” (Pope Francis, Krakow, 27 July 2016).