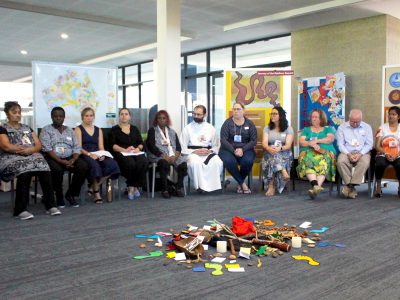 Certain parishes of the Archdiocese of Perth are going that extra mile to better understand and engage with aboriginal people within their respective communities.

Aboriginal Catholic Ministry (ACM) is liaising with parishes to run workshops to learn about aboriginal people and culture.

Representatives of Rockingham, Kwinana, Baldivis, and Port Kennedy parishes made great strides towards building relationships with the aboriginal community during a workshop on Saturday 12 May at Kolbe Catholic College.

The Head, Hearts and Hands project was put in place by ACM late last year after some Archdiocesan priests identified the Church’s relationship with aboriginal people as an area that they wished to strengthen.

“We are inspired by what John Paul II said when he came to Australia in 1986, when he said that the Church won’t be the Church that Jesus wants until you have made your contribution and that has been joyfully received,” Ms Burrows said.

She said she felt “a sense of the Church working together” on the 12 May workshop.

“It looked at specifically what were relationships, family, culture, and spirituality like before the first settlers came. We look at that sense of order and structure.

“Then we look at what happened when we did come and how that may have caused some fracturing of that strengthening culture, and then we look at what that means today. We look at the reconciliation movement, and how as individuals and communities we can build better relationships,” she elaborated.

Ms Burrows was pleased with how the day went.

“I think it was a really great combination of aboriginal and non-aboriginal people together, of people from school and parish, and some people who didn’t know the Church’s history with aboriginal people,” she added.

“Or we are hearing about the Stolen Generation from people that’s part of their lived story. Some people had never heard of it before, so it was quite a healing day for some of the aboriginal people also for the non-aboriginal people to learn.”

ACM Perth is now aiming to engage with other parishes, with plans already in place to work in the Armadale and Kelmscott suburbs in the near future.

“What I think was beautiful about it was the collaborative, it was recognising that our parishes are bigger than just the Church on Sunday,” Ms Burrows said.

“We want our parishes to be seen as partners in reconciliation, partners with aboriginal people and their communities.”

Synodality and Parish Renewal on a Similar Journey

by Fr Nino Vinciguerra Pope Francis has just announced a

Part 2 In the previous edition of Fr Nino’s Corner

Off to a Good Start

By Carmel Suart   Priests in all parishes, together with